The Novus, a four piece funk, punk, indie band from the midlands are going from strength to strength, releasing new music, gaining followers and playing shows up and down the country. I recently caught up with their lead singer, Connor. 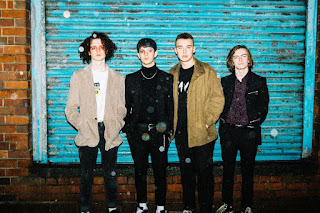 You’ve really grown since the band started, but how did The Novus come about; and where did the name come from?
Me, Tyla and Tom have known each other since we were 11 years old and we met Euan when we were about 16. We have always been in bands and in the music dept at school and it was really the only thing we used to actually bond over. Then we kinda just made The Novus in about year 12 and it’s gone from there really. We were all in a band called Millennium before (we are all born in 2000) and we wanted to be a newer more improved version of that. The New sound like a pretty crap name, so we looked into all sorts and its actually the Latin translation.

What piece of advice would you give bands like you that are trying to get into the indie scene?
This is a difficult one because everyone will take their own paths in the music industry. My one thing would be to try and make a scene around you, be part of the scene, support other bands. Not just in the sense of being on the bill on their shows, but going to see them out of support. I’d also say, put on a show like you’re playing Wembley Stadium to 90K people every time. We got our management from playing to 30 people in a room in Birmingham. Big gigs are amazing, but small gigs can be just as credible for getting you somewhere so don’t be afraid to play small capacity venues.

You’ve played some pretty cool venues, but if you could perform on any stage or any arena where would it be?
We’ve played some very quirky venues haha. Our ultimate favourite is definitely The Sunflower Lounge in Brum. It’s a place where we’ve seen some of our favourite bands. If there was a small venue to play, there would be the option. I think I can speak for everyone again, we would love to play a show at the O2 Institute. We’ve done the O2 Institute 2 before, but the main venue has so much history and is a great place to watch live music.

Back in late 2018 The Novus released a new track called Break, an angry outcry against an establishment they feel has failed them. It’s a tune, and you should definitely give it a listen:


‘Break’ has a very political message behind it, how has politics inspired you as a band and if you had a message for the establishment and government what would it be?
Our music is now more tailored to tackling social issues surrounding us rather than just writing music about sex, getting drunk and relationships. We are all pretty left wing and quite radical so we love to put that in our music, it also give you a massive passion and allows you to put on more of a show because its something you really believe in. Our message would be to stop pissing about and get on with the job you’re actually employed to do. Listen to the people.

We couldn’t talk politics without asking the million dollar question; what are your thoughts on Brexit?
Brexit is a bit of a mad one isn’t it. We are all pretty anti Brexit because we want to explore Europe and we knew we would have to pay for VISAs…

You had a great 2018 as a band, what was the highlight? and what can we expect for 2019?
2018 was a mad year for us, and its been massive. We got to play a 600 cap venue which was amazing as well as being able to play our first out of town gig in London. 2019 is going to be an even bigger year. We have got shows booked all over the country as well as a couple of festivals in the pipeline. We are recording in February for a few days with our amazing producer Gavin Monaghan who has produced the likes of Ocean Colour Scene, The Twang, The Sherlocks, Paulo Nutini, The Blinders and so many more.

All we want to say is thank you to everyone for your support so far, and we can’t wait to take you on this journey with us – its gonna be mad x

Thanks for reading, hope you enjoyed our chat – check The Novus out on their socials; @TheNovusBand or catch them live, they put on a great show!