Denis Coleman is a sixteen year old singer/songwriter. He was born in America but is based in London. He recently opened for The Vamps on their UK tour as part of The Power Of Muzik, a platform that allows talented singers and musicians to tour schools focusing on issues such as bullying and mental health; and last month opened up for New Hope Club in Europe. I was lucky enough to catch up with him before he heads out on his own mini headline tour later this month. Listen to his single Imperfect here:


Earlier this month you finished touring with The Vamps with The Power of Muzik, what was it like singing in front of so many people?
It was incredible! One year before going on tour with them, before I was even a pop singer, I saw them play the O2 arena in London and thought it would be amazing if I could do that one day. And then one year later I did! It was literally a dream come true.

The Power of Muzik has a big focus on mental health and bullying, why is this important to you and how has being part of such a good campaign impacted you personally?
Several of my friends have suffered from mental health issues and I used to be bullied when I was younger and saw firsthand the effect that it has on people. I always wanted to be able to help people somehow with my music and this was the perfect opportunity to do so!

It has recently been announced that you’re supporting New Hope Club on their Europe tour, what were some of the best bits?
I really enjoyed being able to see all the different parts of Europe we visited and meeting all the incredible fans! And New Hope Club are great guys so it was nice spending time with them.

I was interested to see you studied at the junior department at the Royal College Music! As a conservatoire student myself I was curious as to how has your classical training has influenced your style in popular music?
It’s been super helpful in understanding how music works both from a performance and writing aspect. Every now and then I put a bit of violin in a track as well 😉. I didn’t know that, that’s so cool! Hope it’s all going well!

Have you got a favourite piece of classical music?
I think as a violinist the Bach Chaconne is my number one, it’s amazing to listen to and to play!

You’re going on your own mini tour this month! Everyone is so excited to see you, have you got any exclusive information about the tour/new music?? Also, is the famous Denis chair coming with you?
There will be new originals, new covers and yes of course the chair will be there!!

Time for some fan questions! Thank you to everyone who sent in your questions; Denis picked his favourites but all your questions were great. 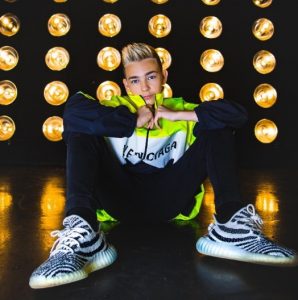 – What’s your favourite Vamps song? ~ Morgan (@morganelizabeth_x)
All Night
– Who’s your biggest inspiration ~ Maisie (@blazingbibby)
Marvin Gaye, Michael Jackson and Travis Scoot would be my top 3 of all time.
– How do you get your hair so perfectly blonde ~ Millie (@honeyblssm)
Bleach haha!
– If you could only eat one food for the rest of your life what would it be? ~ Emily (@emilypalmerfxo)
Sushi 🍣😍

Finally, you released the music video to Imperfect in May, how would you describe the experience of making the video in three words?
Exciting, fun and hilarious.

Thank you so much for your time Denis!
You should all definitely check out Denis over on his social medias @deniscolemanmusic/deniscmusic, and if you live around Brighton, Liverpool or London go to his shows which are happening in the next couple of weeks!