Forts Like Vana; made up of Logan, Derek, Nito and Diego are an alternative pop/rock band from Nashville, Tennessee. They only formed in January 2018 but have created a global following for themselves. In February they released a music video for their song Again, featured on This+This=That; I had a chat with frontman Logan Linds about the creation of this song and what it was like to film it!

What inspired you to write Again, and what was the writing process like?
So, Again is a really special song to me because the entire song is about a toxic relationship that I was in. The relationship was so on again off again and full of toxicity it got to the point that one time while we were driving and arguing, my ex tried flipping us into a ditch while punching me in the face screaming at me to go kill myself for not wanting to be with her anymore. That’s just a portion of the crazy, I could go on and on about it lol.

It was a fun writing process. We were just sitting on our broken couch hanging out like normal and Derek started playing this guitar riff that had a cool vibe to it. I started just spitting random melodies and lines out and with how repetitive everything sounded I thought of the word again and instantly thought about the chaotic relationship. The song was fully written in about 20 minutes and we recorded it the next day.

How would you sum up the song in one sentence?
Accepting you are apart of and enjoy the infatuation of a chaotic relationship.

In your music video you’ve said that it is based upon true events, how important to you is writing songs based on your own experiences?
For us, I can say that is extremely important. Every song that we have written is about an experience that we went through or is about our everyday lifestyle. You can hear a song and tell if the artist actually wrote that song or if someone did for them just by the way its delivered. We always want to show our real self through our music.

If you had to have a lyric of Again tattooed what would you choose, and where?
I’d probably get the line ‘tangled up in crazy’ somewhere on my arm if I had to choose. Turns out that ex bought and picked out a tattoo of mine so every time I see it it remained of the craziness and of her.

After watching the music video I definitely want to go to a Forts Like Vana party! How would you describe the aesthetic of the music video to someone who hasn’t watched it?
You should totally come out to a party of ours! Always endless beer and other party favours laying around to do. We even got piñatas and broken TV’s lying around to smash lol. The aesthetic of the video is 100% what we do everyday haha. We have always got our house lit up with blue and purple lights, there’s always beer bottles and broken cups and crap all over the place and normally there’s at least a few people passed out on our couches somewhere by 4am.

We planned to film that video on the day and we just so happened had a party going on so we filmed and planned the video in a matter of minutes haha. We definitely like to keep things natural and it was dope getting to put a house party in our video.

I love how the video is shot in one take; what was the filming process like for you?
Thanks! We can’t believe we got it right in one take haha. We mainly planned to shoot an idea in 1 take because we are so broke we couldn’t afford to pay someone to edit it and piece it together. The song is called Again so because of that we wanted to show a toxic love story repeating itself. So throughout the video you see me walking back in to events of the night before like its all repeating. I love how it turned out.

Finally, you’ve got a few US shows coming up, how are you preparing for those and have you got any plans to tour UK/Europe? 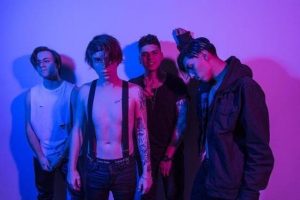 Yeah we’re working on trying to tour everywhere that our fans are in to meet them all and play some wild ass shows. For us we don’t really practice its more of us just playing. We constantly jam and mess around together and if we feel like going through a song we do. We like to keep everything natural and never force anything. It definitely makes our live shows wilder because we don’t use a set list and really love seeing how wild we can get in a venue before being told we have to calm down a bit haha.

We’re not signed or anything so it makes getting shows and touring with some other groups a lot trickier(lame as fuck,we know right?). We’re getting a lot of US east coast dates confirmed for the summer months and working to get across the ocean to the UK area asap because we are dying to be there. So we promise we’re doing everything we can to make it happen!

Thank you for your time! You can check out Forts Like Vana on their socials (and you definitely should) @fortslikevana.