Just a normal Saturday evening on the streets of Westminster, the usual scenes occurring; Londoners going about their normal business, tourists’ faces lit up with the tube routes on Google Maps, unaware of what they were missing.

One man, lucky fans and a megaphone took over The Thames on last Saturday as Yungblud hosted a surprise and very special private party on a boat promoting his latest single which was dropped two days later. Yet, this was not simply an advertising ploy instead it was a protest against the government which saw the Houses of Parliament lit up in pink, blazing the track’s title; ‘There’s Hope for the Underrated Youth.’ A photo of this display was later posted by Yungblud with Boris Johnson tagged, and captioned “…they will hear what we have to say.” A witness that the young generation will not allow themselves to be ignored by politicians. 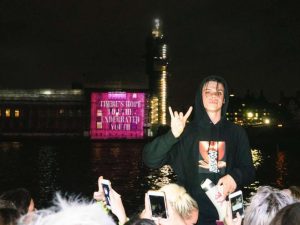 Fans that did not win the tickets gathered at Westminster bridge at 10pm to watch the boat go past and see the impressive projection display. They were greeted with a battle cry from Yungblud as the boat approached; “We can be f*cking heard anywhere we f*cking want to baby, I f*cking love you all!”

These events were not isolated to one night either, following the premiere of Hope for the Underrated Youth on Radio 1 as Annie Mac’s ‘Hottest Record’ on Monday, Yungblud and fans, who call themselves the Black Heart Club, stormed the streets of London eating Nandos and loudly singing the lyrics of his powerful track.

The song itself makes as much of a political statement as the events that supported its release, Dom Harrison (known as Yungblud) spoke about the track on Radio 1; “This song is about the forward thinking, racism-hating, LGBTQ+, liberal “sinners” that we all are. I see that there is hope for this “underrated youth” and I believe the future looks bright because we are in it.” It is refreshing to see music fueled by raw emotion and anger, Yungblud is an artist who recognises the power he has and is determined to use it; not for himself but for his entire generation.

You can listen to the track here.

The Hunna: With us in Dark Times