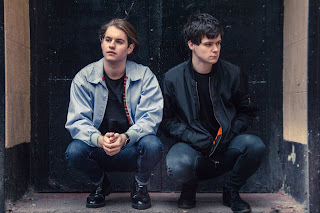 HAWKE are a newly formed band from Dublin, made up of Eoghan MacMahon and Richie Power. After gaining attention for the “new band” on social media they finally launched as Hawke on the 1st of March, as well as releasing a cover of Sunflower which you can watch here.
I got the opportunity to ask them some questions ahead of their opening tour supporting The Hara, where I was privileged enough to see their first live performance as Hawke.

Hawke is quite a striking band name! Where did it come from?

Well, when we were coming up with the name we were brainstorming and liked the concept of ‘needing a clear vision of what you want to achieve in life in order to succeed’. We were messing around with variations of that. ‘Hawk’ came up, as the bird is known for its incredible vision we thought it was a nice metaphor for that. I (Eoghan) thought it was a cool word as well to be fair and adding an E was just the obligatory hipster addition that it needed haha.
You’re supporting The Hara on tour and then playing  Hit the North in May; how are you preparing for live shows as a new band and what are you looking forward to most?
We’ve been writing and working on our sound as a band a lot recently so choosing our sets has been quite important. We’re aiming for some upbeat meaningful anthems. Stuff that not only hopefully connects with people emotionally but also is good to just jam along too. Can’t wait!
Where did your passion for music come from, and what inspired you to start a career in music?
Richie – I’ve always been interested in different types of performing and just doing something that means I’m not taking life too seriously day to day and getting to do something that’s a bit of a laugh really. It wasn’t really until I finished school though that I actually got into music properly and started gigging and stuff but now its just the norm and I couldn’t actually imagine not doing it.

Eoghan – I remember I was 10 years old and I went to see The Rolling Stones live and from then on I knew there was nothing else I wanted to do. 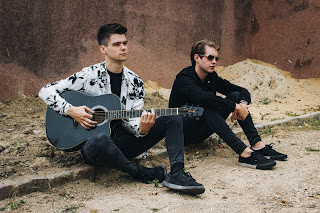 Who are your biggest musical influences as a band?
So we’re both massive Coldplay fans. We love big anthemic, soulful sing along-able, timeless records. We’re trying to take influence from the bands we grew up loving (Oasis/The Verve/U2/The Beatles/Coldplay) and mix that influence with some of the ambient more electronic sounds of today that we love equally.
As a duo you must spend a lot of time together, what’s each others most annoying habit?
Eoghan puts mayonnaise on EVERYTHING, even Sunday roasts???? – Richie
Richie puts curry sauce on EVERYTHING –Eoghan
What can we expect from HAWKE in the next year?
Lots of content. New Music Releases, Tour announcements, music videos, hopefully a headline tour and hopefully an EP. Fingers crossed haha. 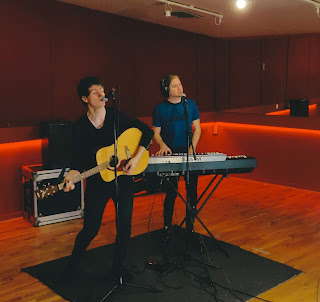 Now time for few quick fire questions!!
-Fave song at the moment?
We think Tom Walker & Lewis Capaldi are both killing it at the moment so anything they’re releasing.
-Have either of you got tattoos?
Neither actually
-Who takes longer to get ready in the morning?
Eoghan takes longer doing most things – Richie
-How would you describe yourself in 3 words?
Motivated, Determined & Poor
Finally, me and my friend are hoping to visit Ireland over the summer; any suggestions on where to visit?
So Galway is the other side of the country but absolutely beautiful and like a smaller but more ‘irish’ version of Dublin if that makes sense haha so would defo recommend there. Dublin then obviously, Guinness’ factory is good. Dun Laoghaire in Dublin is so nice and only a 15 minute train ride from city centre so if the weather is any way decent which it probably won’t be haha, go there!!!
Temple bar is an obvious one at night one of the nights but can be quite touristy but still good craic. Yeah there’s lots to do but just make sure you taste a proper guinness, eat a packet of Tayto crisps & watch an episode of father Ted haha!

We will definitely take that on board! Thank you for your time, it was lovely to get to know you better. If you want to keep track of what HAWKE are getting up to check them out on their socials @hawketheband or at www.hawketheband.com ♡