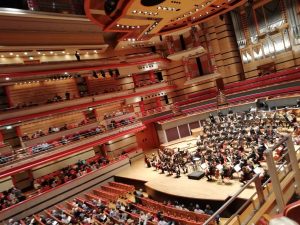 Stravinsky’s ‘The Rite of Spring’: famously complex, powerful and emotive. All three things were captured in stunning fashion by the CBSO Youth Orchestra last Sunday. As an orchestra I was part of for three years it was rather special for me to watch them perform in concert. I was happy to see the concert had a quite full house – young talent always brings people in, matched with the fact Prokofiev Piano Concerto No.2 was performed by Lauren Zhang (Winner of the BBC Young Musician of the Year 2018).

The concert was an afternoon showcase, starting at 3pm instead of the usual 7/7.30. This seemed to work well, and meant that people could get home easily without the struggle of Sunday public transport being highly unreliable in the evening. The concert was also slightly shorter; with only an hour of programmed music plus interval; this kept people interested throughout especially as there were younger siblings at the concert who may have found a two and a half hour concert hard work.

The unique thing about CBSO Youth Orchestra concerts is the higher profile that is created of the concert through social media. Often courses have their own twitter hashtag which encourages people to tweet; thus raising the awareness of both the concert and CBSO as a whole. This continues right through to after the concert when many of the members share photos and experiences – a great way to raise the profile of the CBSO!!

The concert program was well presented and was highly useful for following the parts of The Rite of Spring; where many sections are played continuously; something I thought may have been helpful was to have this information available for all free of cost – or shown on the surtitle machine so people didn’t get lost within the complexities of Stravinsky’s masterpiece.

It was a really good afternoon spent watching the future of classical music perform.

CBSO Youth Ambassador – Big Decisions and Thrill of The New